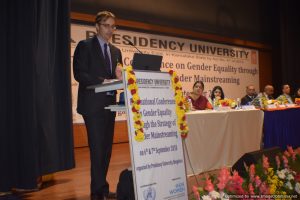 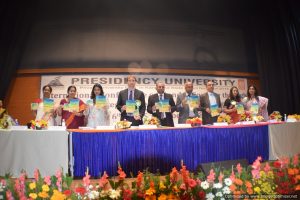 “Women are shaking the pillars of patriarchy system and demanding equality which is their right” This was stated by Mr Derek Segaar, Director, United Nations Information Center for India and Bhutan. Expressing his concern on the depriving of women of their due share in opportunities, Mr Segaar said that in spite of the fact that “women are gifted managers and negotiators still the employment in all important spheres of management and administration the percentage is less than 30%”. Mr Segaar raised pertinent question like crime against women and what are we doing as a society. He concluded with a quote “Gender equality is greatest human rights challenge of our times”. He was speaking on the occasion of inauguration of the International Conference on Gender Equality through the Strategy of Gender Mainstreaming” held at Presidency University, Bengaluru on September 6, 2018.
Addressing on the occasion and emphasizing the need for support, the Chief Guest Prof. ( Dr.) R. Venkata Rao, Vice Chancellor, National Law School of India University (NLSIU) said “women do not require resource persons like me but they need resources from the society”. Prof Rao quoted Martin Luther King and emphasized on “cultivating Justice.” He later added, “Efforts need to be made to humanize the natural relationship between a Man and a Woman, Equality and Equity at all levels in order to bring social justice.”
Addressing the gathering, Ms. Nafisa Ahmed, Member, Board of Governors, Presidency University said that” she is proud to have majority of women workforce at Presidency group of institutions.”
Emphasizing on the role of women as cornerstone of success in nation building, Prof Vijayan Immanuel, Pro Chancellor, Presidency University talked about the “equitable education” as the goal of Presidency Group of Institutions for bringing transformational changes. Prof Immanuel said that the university is committed to carry forward the Gender Equality agenda of the UN and will set up a SDG center for carrying forward the Sustainable Development goals of the United Nations including Gender Equality. He said that the university will organize further activities too including meetings and conferences, if required, in order to give the further push to the Gender Equality agenda.
Prof Sapna, in her welcome address, mentioned that the objective of the Conference has been to provide a platform for discussing the women development issues including research work done in several countries.
In the valedictory address on the second day of the Conference, Justice Somashekhar, Retired Judge of District Court cited various Acts and constitutional amendments made in the country since independence and said that both Judiciary and legislature in the country are seized of te Gender Equality issue. He also called upon the citizens of the country to internalize this issue of Gender Equality and show affirmative action.
Justice Somashekhar also released the book, Gender Issues in ITES sector, authored by Prof Sapna, Conference Chairperson and published by National Law School of India University, Bengaluru.
Conference Director, Prof. Sarasu E. Thomas presented a brief report of the conference and said that the understanding of gender equality and breaking down of gender barriers have to be imbibed right from the young age.
Dr. R K Sharma, Librarian, UNIC and Guest of Honor mentioned the initiatives taken by the Secretary-General of UN in implementing the Gender parity agenda including prevention of sexual harassment and violence against women.in the UN offices. Also, he gave examples of how one can work at the individual level for moving forward the Gender Equality Agenda. Besides, Dr Sharma mentioned that UN recognizes the important role played by the libraries in implementing the Sustainable Development Goals and said that International Federation of Library Associations (IFLA) is the official partner with UN for implementing the SDG.
Ms Madhulika Singh, Guest of Honor, said that every female should look forward to face the future with grit and determination.
Prof. Radha Padmanabhan, Vice-Chancellor, in her address, mentioned the need to bring up the girl child and provide every opportunity to come up and shine in life.
Recommendations for the two days conference include :
(i) Sensitization on the subject of Gender Equality has to begin right from the Schools and all stakeholders including parents, siblings and teachers are involved in it.
(ii) Support to Gender Equality has to be mainstreamed through robust policies, regulatory framework, financial support and other interventions
(iii) We need to get over gender stereotypes in terms of perception about what women are supposed to be and what they do.
(iv) Gender equality has to be internalized as a core value.
(v) Gender messaging should be clear and gender does not restrict only to women. It includes man too.
(vi) There has to be stress on bringing out the potential of a woman.
(vii) Men should be involved more actively in the promotion of gender equality.
Over 200 participants participated in the two days conference held on September 6-7, 2018. Apart from participants from different states of India, there are international participants from 12 other countries. The conference had a panel discussion on “ Gender Equality and Sustainable Development” which was led by Ms Sunita Dhar of Jagori and participated by Dr Aditya Sondhi, Senior Counsel, High Court of Karnataka, Dr Meera Khanna, Activist and Dr Malashri Lal, Retired Dean, University of Delhi. Also, there were invited lectures by Prof Nirupama Prakash of Amity University and by Ms Madhulika Singh of UN Women. There was an exclusive panel discussion by the foreign participants on the status of women. Participants from Sweden, Denmark, Kenya, Mauritius, Bangladesh, Afghanistan, Tanzania, Bhutan, Nigeria, Sudan and Iraq took part in it. There were paper presentation sessions in which over 60 scholarly papers were presented and discussed. Also, there were poster presentations and workshops on “ Women in Leadership” and ‘Combating online women against women”.
The two days conference was organized by the Presidency University, Bengaluru, in collaboration with United Nations Information Center for India and Bhutan and with support from UN Women.