Rashtriya Swachchta Diwas is celebrated on the birth anniversary of Mahatma Gandhi and is a nationwide campaign to bring in practices that will sustain cleanliness in our homes and surroundings. The staff and students of Presidency University observed this occasion with various activities.
Activity on Campus
Like charity that begins at home, cleanliness should do start at home, Mr. N. S. Ramakanth Co-founder of Solid Waste Management Round Table, winner of the prestigious ‘Kempegowda Award’ visited the campus to grace the occasion, he spoke to an eager audience of staff and students, the process of solid waste management through segregation and appropriate waste disposal.
In his address, Mr Ramakanth explained the importance of segregating the garbage at source and also explains that if it is not done it leads to air pollution as the unsegregated garbage emits a foul smell, pollutes the soil when buried in it, or seeps into the water in the presence of a water body. A single act could lead to three types of pollution and hence it is important to first of all segregate the garbage at source.
Mr. Ramakanth also conducted an activity along with all the students to explain how dry and wet waste could be used in the composting pit resulting in zero garbage and high quality manure. Later he also gave a detailed demonstration with examples of how solid waste management has been used successfully in community areas like temples, wedding halls, while also emphasizing on the importance of using recyclable goods at all times. 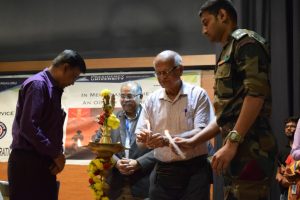 A practical demonstrating solid waste management on Rashtriya Swachchta Diwas , 2nd October 2018 and Sapling planted to mark the occasion
Social Outreach activities by Presidency University Group to Help Others (PUGHO)
The faculty and students of the PUGHO, a community service club of the University visited a nearby village – Chokmali , to carry out a cleanliness program along with creating awareness amongst the residents of the village on solid waste management practices and the importance of maintaining clean surroundings around them. Faculty members had met the Sarpanch of the village at an earlier date and obtained the required permission to enter their village and work with them.
The village school and its play area was cleaned by our students and segregation at source was demonstrated to the village school students. Later the university faculty led the students in a door to door campaign explaining the importance of waste segregation and clean surroundings. The entire Program was well received by the village community and they expressed that more such camps are required.

A social outreach program to clean Nandi Hills, one of the most famous heritage sites in Bangalore, Karnataka was organized on 2nd of October 2018 by School of Management and Sustainable Development Goals Center (SDGC), Presidency University, Bangalore. Sixty Two students and Eight faculty from School of Management participated in the drive. Students were divided in to eight teams under eight faculty team leaders and they collected dry waste on the site. They collected 33 large bag waste which was about 100 kg of dry waste. This was safely deposited in the Nandi Hill waste collection center in line with the direction from Nandi Hill authorities. The Nandi Hill administration was impressed by this initiative, and issued a Letter of Appreciation to the University and gifted Picture Directory of Nandi Hills to the University Library. They solicited more such community initiatives from the University.

Many tourists were attracted to the work and joined hands with the students. The Team felt like “Celebrities of the day”, when a passerby made a statement that “Great Job Bro wishes”. The event was beneficial for students to be more environmentally conscious and socially responsible. This also reinforced the university’s commitment to SDG Goals.