Presidency University organized the Rashtriya Ekta Diwas in the university campus on 31st October 2018.
Rashtriya Ekta Diwas (National Unity Day) is to be celebrated on 31 October every year as annual commemoration of the birthday of the Iron Man of India Sardar Vallabhbhai Patel, one of the founding leaders of Republic of India. The intent is to pay tribute to Sardar, who was instrumental in keeping India united. The official statement for Rashtriya Ekta Diwas by the Home Ministry of India cites that the National Unity Day “will provide an opportunity to re-affirm the inherent strength and resilience of our nation to withstand the actual and potential threats to the unity, integrity and security of our country. National Unity Day celebrates the birthday of Patel because, during his term as Home Minister of India, he is credited for the integration of over 550 independent princely states into India from 1947- 49 by Independence Act (1947).
Highlights of the day at Presidency University included the Unified Bharat Run, a speech on the importance of Unity, street plays by the students and taking the Rashtriya Ekta Diwas pledge by the staff and students of Presidency University.
1. The Unified Bharat Run
As a token of commemorating the day of Unity, enthusiastic students held a banner proclaiming the day and jogged around the campus serving as a reminder to everyone on the all-important factor of unity between us.
2. Address by the Vice Chancellor – Prof. Radha Padmanabhan
The Vice Chancellor spoke on the significance of unity with a simple story in her initimitable style and held the audience’s attention.
3. Street play by the NSS
The NSS unit of Presidency University presented a street play on the importance of unity and how we came to be one nation.
4. Street play by the Cinemascope Club
One of the clubs on campus, the Cinemascope club presented a street play on the meaning of unity and how it can be seen in our country.
5. A Speech on the Significance and Meaning of Unity
Prof. Sujeet Jha, Head of the Department – Learning and Development gave an interactive talk filled with anecdotes from the past when India was attaining its present form. He gave relevant examples from day to day life to emphasize the meaning of unity and why all of us need to work for it
6. Rashtriya Ekta Diwas Pledge

In the end, Master of the Ceremony, Ms Nirmal Kaur administered the following pledge to all the participants : I solemnly pledge that I dedicate myself to preserve the unity, integrity and security of the nation and also strive hard to spread this message among my fellow countrymen. I take this pledge in the spirit of unification of my country which was made possible by the vision and actions of late Sardar Vallabhbhai Patel. I also solemnly resolve to make my own contribution to ensure internal security of my country. 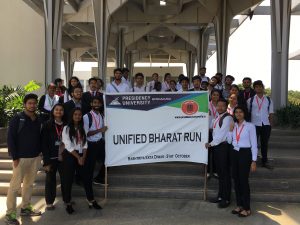 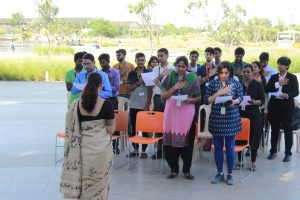 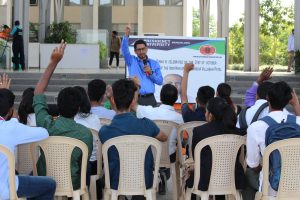 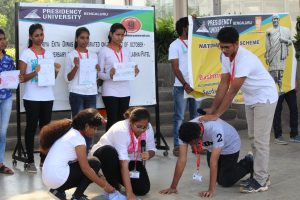