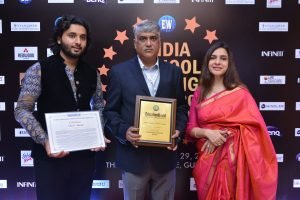 Honorable Chancellor, Sri Nissar Ahmed has been conferred the Education World Lifetime Achievement Award 2019. The Award has been bestowed on him for masterminding the sustained growth and development of the Presidency Group of Schools, Bangalore (which are highly ranked in the EW India School Rankings), Presidency College and the Presidency University. The Award was presented in the recently held Awards Ceremony in Delhi. Sri Salman Ahmed, Vice President and Smt. Kauser Nissar accompanied the Honorable Chancellor while receiving the Award.