‘Hasta La Vista’, the farewell function for the first outgoing batch of 2015-19 of Presidency University was held on 15th May, 2019 in the auditorium. Present on the occasion were the Hon. Chancellor, Sri Nissar Ahmed, Pro Chancellor, Prof. Vijayan Immanuel, Vice Chancellor, Prof. Radha Padmanabhan, Pro Vice Chancellor, Deans, Key officials, faculty members and students of the outgoing batch.
Certificates of Merit were distributed to students for excellence in academics. Messages from the former Pro Chancellor, Dr. M Ramachandran, former Vice Chancellor, Dr. Nagendra Parashar and Dr. Calvin, the former Dean of the School of Engineering were read and displayed on the screen by Vice Chancelor, Prof. Radha Padmanabhan which created an atmosphere of nostalgia for all.
The cultural fiesta kicked off with a very entertaining and melodious rendition of famous songs by faculty members, Mr. Aurobindo and Ms.Shahnaaz and this was followed by the band performance by students of the out- going batch, Mr. Issac, Mr. Ron, Mr. Anil and Ms. Lemula and later by Mr. Sam and his team. The anchors led by the member of the faculty, Mr.Harsha included four students Mr. Jibin, Mr. Akshay, Ms. Shreya and Ms.Siya who did an excellent job of handling the stage well.
After the dance performance by Ms. Anusha( former student of Presidency School, Kasturi Nagar) and Ms. Ayushi , it was the turn of VB Crew, the college dance group to rock the stage. Mr. Aditya Lakshman and team came up with a set of popular awards for the out- going batch on basis of an Instagram poll and this literally sent the audience into splits of laughter. The video of the 2015-19 batch put together by Mr. Deepak and team touched many a heart. Ms. Fairie Queene spoke on behalf of the graduating students.
The events closed with the address by the Dean of SoE, Dr. Prabhakar Reddy who encouraged the students to keep the flag of Presidency University flying high as they are the ambassadors for the university. Tastefully designed mementos were distributed to the students and the programme was followed by a grand lunch for all. The venue decoration handled efficiently by the in – house student designer, Ms. Ananya and the team won appreciation from all. Mr. Brian who designed the invitation deserves a special mention for his digital talents. Talking about the event, the students and the members of the staff were appreciative of the efforts of the Students Welfare Department for organizing the event so efficiently. 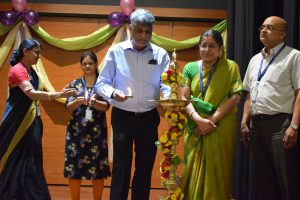 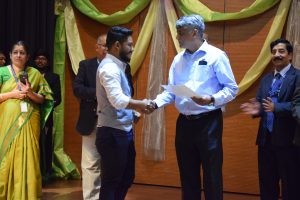 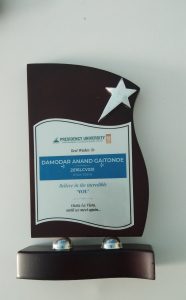 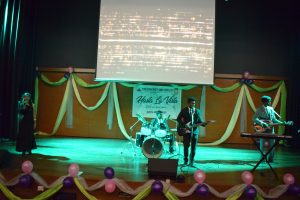 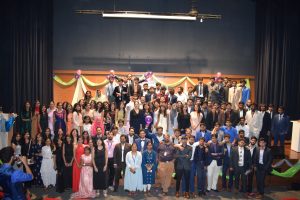 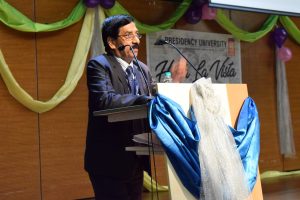