Armed Forces Flag Day was celebrated in the University on Friday, 7th December 2018. A talk on the significance of Armed Forces Flag Day by a retired Air Force Officer, Capt. Ravindra R. Kulkarni, and a few patriotic songs by the students of the university marked the event. Vice Chancellor, Prof. Radha Padmanabhan, Deans, faculty and students of the university participated in the event.
The program began with patriotic songs by the students following which Vice Chancellor Prof. Radha Padmanabhan introduced the guest, Capt. Ravindra R. Kulkarni and paid glowing tributes to the Indian Army personnel. Vice Chancellor said that we are secure today only because of the services and sacrifices made by the Indian Army.
Speaking on the occasion, Capt. Kulkarni, said that since the day the country was born, we have been noticing three border threats – on the west, east and the north. Besides, the country has been facing periodic security challenges in-country insurgencies, riots and regular natural disasters. But the Armed Forces have protected the country firmly and never failed us. The Armed Forces Flag Day or the Flag Day of India is a day dedicated towards collection of funds from people of India for the welfare of the Indian Armed Forces personnel and their families. It has been observed annually in India on December 7 since 1949. Over the years, it has become a tradition to commemorate this day as an honour to the soldiers, sailors and airmen of India.
Capt. Kulkarni said that though the service conditions as well as social life in the Armed forces have improved a lot over the past half a century, there has been a decline in the number of people joining the Army or defence forces. Stating that the country needs the services of youth for the army, Capt. Kulkarni called upon all youth to join the armed forces and serve at least 3-5 years. Capt. Kulkarni said that girls can also join the fighting forces including the infantry division. Narrating some of his experiences, Capt. Kulkarni said that his service in the army has been very satisfying. Army staff get continuous training and skill development, everyone in the army is a soldier first and anything else becomes secondary to an army officer, said Capt. Kulkarni.
Present on the occasion were Pro Vice Chancellor, Dr. Ishwara Bhat, Dean of School of Engineering, Prof. Prabhakar Reddy, Dean of School of Law, Prof. Sapna, other Deans of the University, faculty members and students. Asst. Professor, Smt. Srilekha Premjit compered the event.
Armed Forces Flag Day began as an initiative of the Union Government which saw the need to implement welfare schemes for the welfare of its defence personnel. On August 28, 1949, a Committee set up under the Defence minister decided to observe a Flag Day annually on December 7. The idea behind observing a Flag Day was to distribute small flags to the general population and in return collect donations. Flag Day gains more significance as it considers that it is the responsibility of the civilian population of India to take care of the families and dependents of the armed forces personnel who fight for the country. 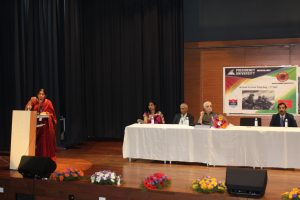 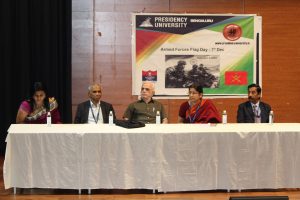 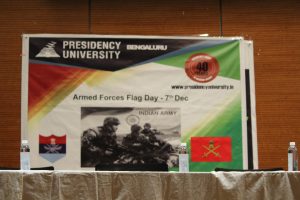 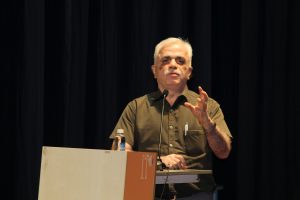