Speaking to the students, the Vice Chancellor said that the death anniversary of former Prime Minister of India, Sri Rajiv Gandhi is observed as Anti-Terrorism Day.  Rajiv Gandhi was the 6th Prime Minister of India and he served it from 1984 to 1989. He was campaigning for the Congress Party as its President for the national elections when he was assassinated by terrorists in Sriperumbudur, Tamil Nadu, in May, 1991. The Anti-Terrorism Day is observed to spread the message of peace and humanity and to promote unity among the people. The purpose of anti-terrorism day is to spread the message of global peace and non-violence and stop youngsters from following cult practices and being misguided. Vice Chancellor added that, Anti-Terrorism Day also honors the sacrifices made by thousands of soldiers who fought against terrorism. It’s a day to pay tribute to those who lost their lives in terrorist attacks.

Vice Chancellor explained how the terrorist activities are detrimental to national interest.

The event was held on the canopy. Present on the occasion were, Pro Vice Chancellor, Deans, HoDs and faculty members, besides the students. 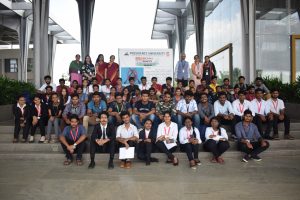