1st Year BTech Students visit “Bengaluru India Nano” Exhibition on 7th December 2018
28 students of 1st Year BTech attended a session on “Nano for Young” as a part of “Bengaluru India Nano Exhibition” on 7th December 2018 . This session was organized by the Government of Karnataka as a part of Annual International Nano Exhibition under the guidance of Bharat Ratna Prof. C N R Rao on 5th to 7th of December 2018.
Researchers and industrialists from various parts of India and foreign countries exhibited their innovations and advances in Nanoscience and Technology. There were more than 50 stalls. Students of Presidency University interacted with the exhibitors effectively.
Before the commencement of lecture session all the students were given copies of the book, “NANO WORLD’ authored by Prof. C.N.R. Rao which gives an introduction to basic concepts of Nano Science and Technology.

More than 800 students from different parts of Karnataka attended the lecture session which was chaired by Prof. A. K. Sood, President, INSA, Honorary Professor, IISc, Bangalore. There were four key note speakers.
At first, Prof. G. U. Kulkarni, Centre for Nano and Soft Matter Science, JNCASR, Bangalore gave a talk on “How to make Gold nobler?” It was followed by a talk on “Low-cost handheld explosive detectors” by Prof. Ramgopal Rao, IIT Bombay & IIT Delhi. The 3rd talk was on “Nano voyage” by Prof. Ambarish Ghosh, Centre for Nano Science, IISc, Bangalore. The last talk was by Prof. Chandrabhas Narayana, Chemistry and Physics of Materials Unit, JNCASR, Bangalore, on the topic “Nanoparticles provide light to do Nano–Bioresearch” which explained on how Nanoparticles can be used to detect cancer and other viruses. Each talk was for 30 minutes duration.

There was an interactive session after the talks wherein the students were allowed to ask questions related to the lecture given. Students of Presidency too asked a few questions.
Overall, the Session was very informative. Our students were very happy and expressed that the event was very useful. 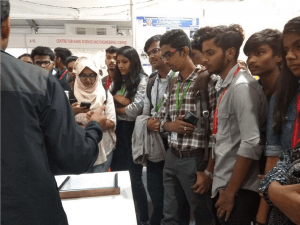 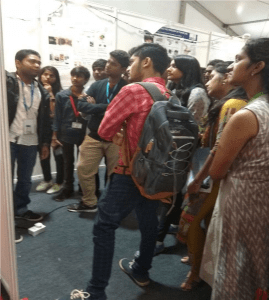 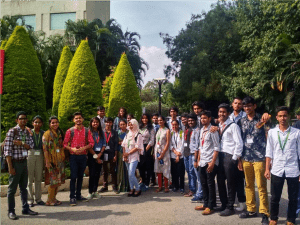